You are here:
Franchises 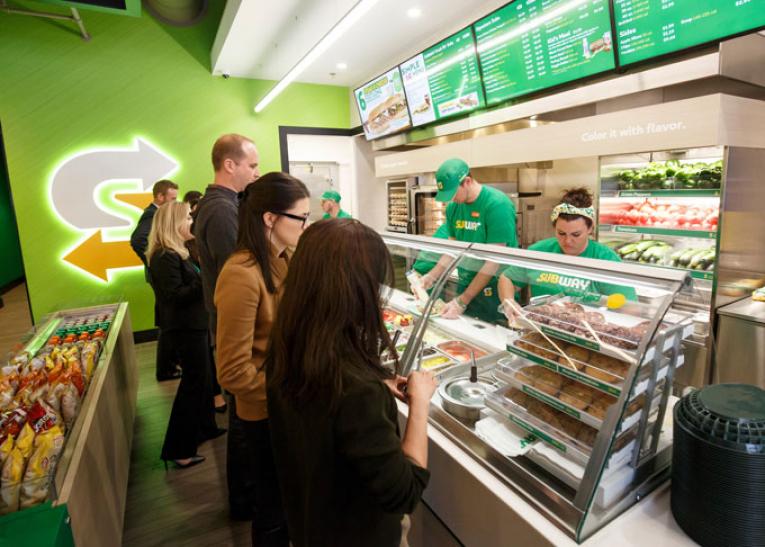 Thanks to a “multi-million-dollar” grant program, Subway is about to ignite its remodel efforts, the company announced July 11. The sandwich giant is providing north of $100 million to franchisees to speed up the program. As it noted earlier in the year, Subway is partnerning with vendors to provide $10,000 grants to operators, about a quarter of the remodel costs, to fuel the Fresh Forward and less expensive Fresh Start rollouts.

“Our franchise owners and their staffs work hard every day to deliver a great Subway experience for their guests,” Don Fertman, Subway’s chief development officer, said in a statement. “By signing up for the remodel program, the franchise owners are making an investment, and showing their trust in the brand. Together, with all that is going on with our global transformation, I’m convinced we are taking this brand to an exciting new level.”

Thursday’s push follows an $80 million investment Subway made last year to emphasize new flavors and foster a more personalized guest experience with its “Fresh Now” platform. Free to franchise owners, the culinary-focused update has rolled to 14 countries, including France, Brazil, Singapore, and Australia so far.

It encourages customization with new sauces, toppings, and beverage options. This includes Flavor Stations, Beverage Stations, with offerings like Tropical Strawberry Lemonade and Pomegranate Limeade. Subway said Fresh Now would be live in all eligible U.S. units this summer. 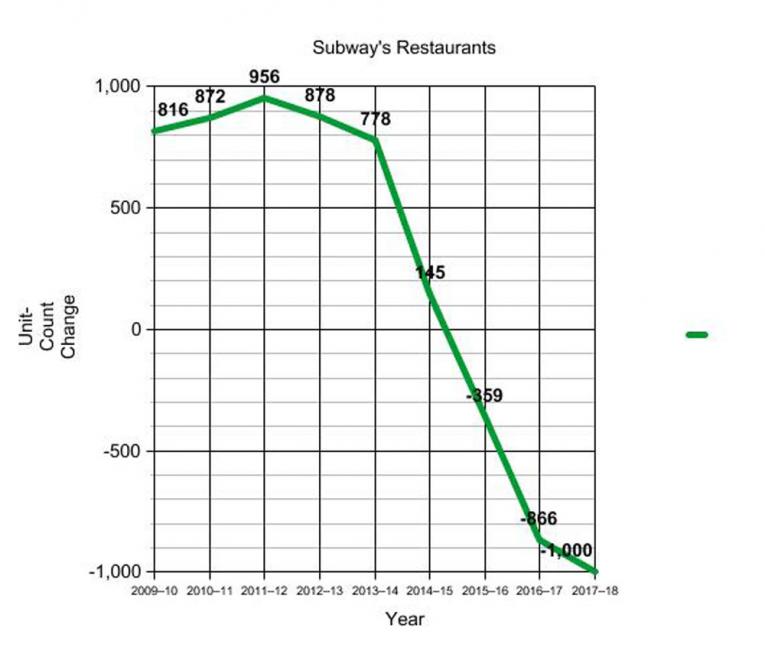 But Fresh Forward is where the needle is moving.

The updated package, complete with a fresh vegetable display case, bold “S” choice mark logo, bright color palette, digital menu boards, and kiosks in some stores, is mandatory on all new openings. However, Subway’s unit count has been retracting in recent years, not growing. After reducing its U.S. count by 866 restaurants from 2016–2017, Subway dipped below 25,000 in the U.S. this year, the company said in January. That’s roughly a 1,000-store drop from the 25,908 Subway closed 2017 with.

Subway’s “optimization plan” centers on relocations, remodels, and an effort to rework the system to create a fleet of fewer, but more profitable, restaurants.

There’s no secret why Subway is in a hurry to accelerate remodels. In September 2018, the company’s Fresh Forward design was in 465 locations. And the results compared to legacy units were stark.

Subway at the time sampled a collection of Fresh Forward U.S. stores and juxtaposed them with old ones. Gross profit was up 11 percent. Traffic lifted more than 8 percent.

In those Fresh Forward designs at relocated restaurants versus remodels, Subway saw an even steeper hike in sales and traffic—about 18 percent and 15 percent, respectively. 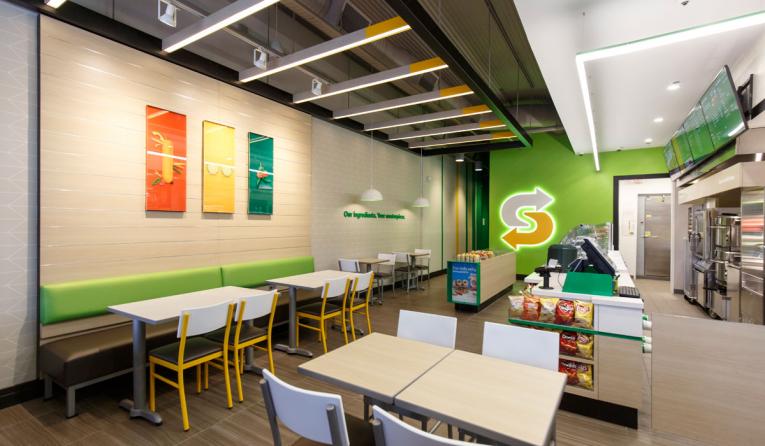 Over the course of the first year, Subway managed to cut the costs of the redesign in half, it said. The company also introduced the Fresh Start tier, which ran another 50 percent less, in an effort to open the platform to operators at all levels.

The Fresh Start model was designed specifically for remodeled locations. It takes the critical elements of the update, like the color refresh, logo and furniture, and makes it available at a significantly lower cost.

Beyond just the ROI of updated units, Subway said, it wants to refresh locations to reflect other changes in its trajectory. A brighter, more innovative look supports how Subway is evolving and wants to be seen by a new wave of customers. It offers synergy with some other innovation-forward messages touted by the brand. At old units, an outdated look and fresh message simply didn’t mix.

“The whole Fresh Forward décor, from the bright green and fresh elements, it all signals to consumers that there’s something new going on at Subway,” Tracy Steinwand, Subway’s VP of field performance, told QSR earlier.

One example being the fresh vegetable display case installed behind the sandwich line. Five decades of slicing vegetables in-house didn’t resonate until customers could see it.

Matthew Mabel, president of consultancy Surrender Inc., said Subway long rode its standing as a healthier alternative in quick service. That worked well for years until competitors began introducing their own health-forward options and upstart fast casuals built entire businesses around the positioning. Meanwhile, Subway became far from the only premium sandwich game in town.

“I think they’re going to have to continue to refocus the brand, the look, the logo, the feel as they look forward to getting back to the dominant player they have been historically,” Mabel told QSR. “Their competitors have picked off their guests in the segment and now they’ve got to get them back. They’ve got to convert those longtime Subway guests that have left.”

All of this provides a sense of urgency for Subway, which explains the grant program.

“Franchising works best when franchise brands and franchise business owners succeed together,” said Stephen Worley, senior director of communications for the International Franchise Association, in a statement. “IFA commends Subway for their efforts to facilitate these renovations, which can benefit franchise owners, their employees, and their customers alike.” 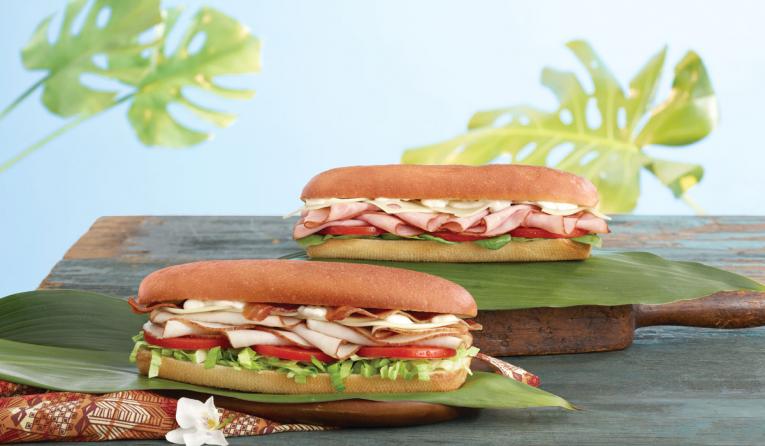 Subway’s new King’s Hawaiian test is one of many menu innovations lately.

In addition to the look, Subway has been far more active on the menu front than usual lately. It’s introduced Ultimate Cheesy Garlic Bread, pulsed LTOs into its Signature Wrap lineup, and piloted King’s Hawaiian bread at select restaurants. Recently, the brand launched a Ciabatta Collection and Hubert’s Lemonade and is testing Halo Top Milkshakes at 1,000 restaurants.

Subway is also leaning on its partnership with Tastemade, a food media brand known for its social media prowess. Tastemade touts sophisticated data about how consumers interact with food and how food connects to the wider culture. Such insights served as inspiration for the Green Goddess Tuna Melt, an LTO once available in 3,000 restaurants that combined Subway’s classic tuna offering with green goddess dressing, a popular ingredient frequently featured in online recipes.

Subway is pushing new menu items out across the globe, including paninis in New Zealand and Signature Wraps in the Middle East, the company said. But moving forward, Subway will maintain its everyday value options.

Mabel added that Subway should be wary of moving up and down price points simultaneously, though. “They need to pick one,” he said.

Still, the brand seems to be headed in the right direction by broadening its appeal.

Fertman told QSR earlier that Subway worked on strengthening its relationship with franchisees, many of whom expressed frustration over the thin profit margins associated with the famed $5 footlongs promotion. He said Subway moved away from discounting core sandwiches in favor of launching more options and innovations across a wide variety of price points. That’s a pretty profound change in Subway’s go-to-market strategy, Fertman said.

Len van Popering, promoted to Subway’s chief brand and innovation officer in May, added that Subway wanted to find a way to balance its classics with bolder flavors and new experiences.

The chain updated digital properties as well. Subway’s MyWay Rewards program, announced last February, was built on the premise of a more customized experience wherein users can earn and redeem tokens in a variety of ways. The program is integrated into the new version of the app. Subway launched delivery at 9,000 restaurants in October. The massive push involved partnering with UberEats, GrubHub, DoorDash, and Postmates.

Earlier in the year, Subway said its app was enjoying year-over-year growth of 100 percent in users following a May 2018 redesign.

Hourigan most recently served as VP of marketing at Victorinox Swiss Army. Hourigan’s duties will include building Subway’s delivery platform, among other initiatives.

Recent Articles
RMD Can Help
If you need quality, experienced assistance with your next commercial construction project, we're available for a free initial consultation.
Go to Top